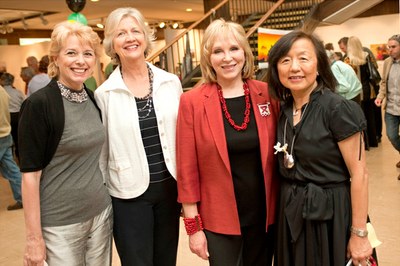 The Alemany Library at Dominican University of California is presenting a photography exhibit — “Our Fertile Ground: Helping South African Children With HIV/AIDS” — that began July 16 with an Opening Reception in the library’s first-floor gallery.
Cheryl Jennings at Our Fertile Ground

The exhibit, which will be on display during normal library business hours through August 31, highlights the photographs of “Our Fertile Ground” founders Jawaya and Robert Shea, in addition to photographs and images by Ren Chin, John Harris, John Nisely and Joe Blumenthal and Monotype Collage. The opening reception was co-hosted by the School of Health and Sciences at Dominican and Cheryl Jennings, ABC 7/KGO Television news anchor.

Jennings, a Marin resident, has won two Emmy awards for a special presentation on HIV/AIDS. Her story featured “Our Fertile Ground,” a non-profit organization that aims to inspire hope for youth and families in South Africa infected with or affected by HIV/AIDS. It is currently creating community camps where HIV/AIDS affected children can thrive in a supportive and healthy environment.

Photographs and images of “Our Fertile Ground” at Alemany Library are accompanied by text composed by Jennings.

SAN RAFAEL, Calif. — Two Marin County men are joining forces for a big humanitarian bike ride in South Africa to help young people with HIV and AIDS. In March, they’ll be joining 35,000 people in the Cape Argus Cycle Tour, along the beautiful coast of South Africa, on a 70-mile ride.
The men will be on a small team to raise funds for a program called Our Fertile Ground, which provides support for children with life-threatening illnesses.

“We see the bicycle as an empowerment vehicle. It’s a way to give people personal freedom and mobility and liberty that nothing else can give them,” said Founder and CEO of San Rafael-based Mike’s Bikes Ken Martin.

Robert is using sports to help kids and families cope with the AIDS crisis in the Cape Town area. Entire families are affected and don’t talk about it. The stigma makes it too dangerous.

“Some, the deeper rule there, is you can get killed if they find out your status,” said Shea.

A number of children and adults with the Our Fertile Ground program participated in last year’s charity ride. It’s called the Cape Argus Cycle Tour and Shea is helping them get ready for this year’s ride.

Shea and his wife, Dr. Jawaya Shea, work with children and families suffering life-threatening illnesses and who live in dire poverty. That’s what their non-profit is trying to change through the power of the bicycle.

The 11 shops involved with the Mike’s Bikes foundation shipped more than 10,000 bikes to Africa in less than seven years. And Martin has seen the way a bicycle can change a life.

“Like with Robert and with our sister shops, where the bicycle, through the bicycle, we’re able to teach people a skill. So it’s something they can bring to market themselves and, you know, find employment at some point. From people who can now get to work, who weren’t able to get to work within 3 hours of their house,” said Martin.

My family and I saw the way Jawaya and Robert Shea’s non-profit changed lives back in 2009. We met some of the families in the program in South Africa.

The children had never seen the ocean, or the wildlife that tourists come to photograph. We learned that most families don’t even tell the children they have HIV or AIDS.

“They’re getting ready possibly to be sexually active, you know, not knowing their status. They think that they have a bug in their blood; cancer, everything but the truth,” said Martin.

Robert Shea’s son, Robert, Jr. knows about the stigma of HIV and AIDS.

“They didn’t think I’d live past [3-years-old], yeah and every year they kind of have told me the same thing,” said Robert, Jr.

He and his dad are both living with AIDS. I met them when Robert, Jr. was just six-years-old at a program called Camp Sunburst for children with HIV and AIDS. It was back in the early 90s when many Americans were afraid of the illness. And most children died.

Robert, Jr. just turned 24. He’s been to South Africa to talk with the kids and show them why he’s proof that AIDS is not a death sentence anymore.

“Definitely the medication and a big support group system. Having lots of friends is very key thing,” he said.

The Our Fertile Ground dream is to buy land near the Cape Point coast for a permanent camp site. It’s also right next to a popular bike route. It’s a natural charity and business fit.

“Many people go through the Cape Point area on a daily basis, riding and practicing for other races,” said Shea.

Not everyone can make it to South Africa for a charity bike ride, but there is a way you can participate in the wonderful program. It’s as easy as donating an old bike.

“It’s hard for Americans to visualize, ‘ok, there’s this problem 10,000 miles away. There’s an African kid with HIV, he’s getting bullied and he’s getting his, the HIV drugs stolen from him.’ Americans can’t really wrap their head around that. But, we can say, ‘ok, a bicycle is something that can connect us,'” said Martin.

CAPE TOWN, South Africa — A Marin County man and his wife are bringing hope to children in South Africa who are living with AIDS by showing the children a side of their own country they have never seen.
Robert Shea and his wife Jawaya are on a day trip in Cape Town, South Africa, with children suffering from a number of life-threatening illnesses, including HIV and AIDS.

“When I was working in the States, there was a big need for it there, but until I came out here and seen the greater need, I couldn’t turn my back on it, I had to do something about it,” Robert said.

“We have an HIV prevalence of about 24 percent in this country, which is horrendous,” Jawaya said. “It is a big problem because here we have poverty and a lack of resources, so even when children are diagnosed, they don’t always have access to treatment immediately, so they get infected with tuberculosis, sometimes meningitis or worse.”

Robert is painfully familiar with AIDS. He is infected with the disease. His son from a previous marriage, Robert Jr., is also infected.

Jawaya does not have AIDS. She works in Cape Town at the Red Cross children’s hospital. She and Robert met and fell in love at an AIDS conference in Washington and later got married.

“We discovered we were doing very similar things; he was working with children out in California doing camps and I was raising 12 boys in my home,” Jawaya said.

Together they founded the non-profit Our Fertile Ground to help children who are infected with the AIDS virus as well as those affected by it.

Their goal is to create a permanent residential camp for children as a safe haven, where kids can play and not have to think about being sick. They are modeling it after Bay Area camps, including Camp Sunburst and the Taylor Family Foundation’s Camp Arroyo.

“So that we can have these camps routinely, either every week, every alternative week, have family camps,” Jawaya said.

ABC7’s Cheryl Jennings’ family and friends helped sponsor a recent outing. They spent part of a vacation in Cape Town on a humanitarian mission so they could learn more about the children’s situation.

The children and the counselors live in the slums of Cape Town, called townships. There are miles and miles of tiny shacks.

“Being poor is bad, being poor and being ill is even worse, being poor and having HIV is really unpleasant, because you not only get teased, but people will ostracize you, they don’t want to have anything to do with you,” Jawaya said.

Many of the children living with HIV or AIDS in South Africa are not even told they have the disease. They are told they have something else, so they will get sympathy, instead of rejection.

“We went into a home recently where there were eight people living in a two room shack, the adults were sexually active, children see this, and so their sexual debut is really early in some of the townships, sometimes it’s forced,” Jawaya said. “There are other ways children get infected, horrible ways, through child sexual abuse and that’s just the reality here.”

Robert and Jawaya are trying to raise nearly $1 million to buy a property in Klein Waterfall, near Cape Point along the southern tip of South Africa. It is not easy, because they are living on Jawaya’s salary while Robert finishes his psychology degree.

Jim Hallinan, the conservation expert who owns the land, is planning to retire in a couple of years. He wants his family home and land to be used to help the children. It is in a nature preserve just 45 minutes from Cape Town.

“You have all the comforts of a modern city, at the same time, you’ve got nature at your door step,” Hallinan said. “To be able to bring them out to a place like this is quite special.”

The kids and counselors on a recent day trip had never seen the ocean or any of the incredible beauty of South Africa, including the world famous Table Mountain in Cape Town. And they have never seen the wild animals that draw tourists from around the world.

“I’ve grown up in the townships, I’ve never had an experience like this,” Andile, one of the counselors, said. “Now people are beginning to talk more about this disease and I feel it’s kind of a good thing, you know.”

Robert Jr. and his friend Nate Fegette produced a video about the Our Fertile Ground camps. They are aspiring film makers. Robert Jr. is planning a big, bright future. That is a message Robert Sr. and Jawaya want to send to South African children with AIDS.

“If there’s lots of information about this disease, maybe at some point, it will drop down and maybe we can live in an HIV free generation, that would be good,” Andile said.